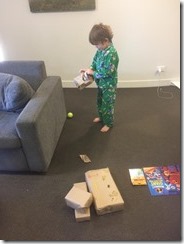 Not everyone gets to celebrate their birthday on holidays, but Damian was one of the lucky few this week.

Whilst his birthday party will be next weekend, his actual birthday falls today, so we kicked off the day (early) with a small number of presents.  After a brief respite (adults get to sleep a little further), we were – yes, you guessed it, pool bound. 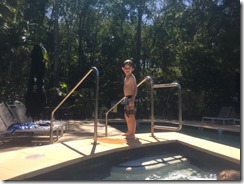 After the ritual morning pool routine, we were back in the room, showered, changed and ready* to go.  We opted to go local, because free admission, but stayed for Big Oma’s cafe which offered treats from the Netherlands. 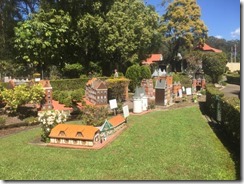 After lunch, we went back into Coffs and to the coffee shop, but the scales I thought I saw there (for weighing the aeropress) must have been in my imagination, so we popped onto the western side of the highway and checked out two op shops (no purchases) before turning the car back north.  This time, rather than driving past, we actually stopped at the famous Coffs Harbour Big Banana.  It’s a fun park more than a farm, and there’s still remnants of old amusements around the place.  It’s heavily expanded from what I can recall of when I went there last (in the mid 80s), and we found ways to blow a sizable fortune on attractions. 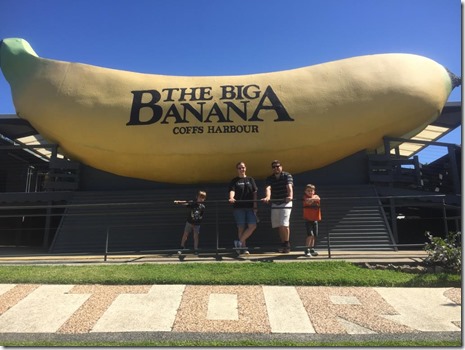 We took some photos with the aforementioned banana before returning to the main ticketing area to purchase amusement admissions.  We unwisely opted for 4 people for laser tag (mostly at the insistence of Jake), the giant slide (would have been a more sound investment) and the toboggan (Coran forest is better).  At any rate, after the giant slide it was all downhill (see what I did there?).  Damian backed out of the laser tag when he was told there’d be a giant robot and grasshopper that can shoot you, so it was Jake vs me in the most lopsided contest since David vs Goliath.  It was also really just Jake running behind me constantly shooting, so I gave him the slip a few times, then he got scared and we finished up a minute early.  I won though, so there’s that.  The grasshopper was hard to kill.  The toboggan was OK, but the one we have at Corin Forest in the ACT is much longer, I guess we’re spoiled by that. 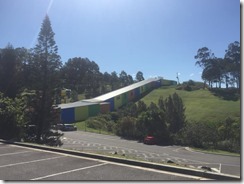 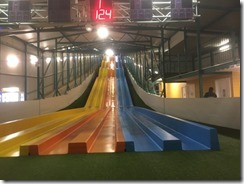 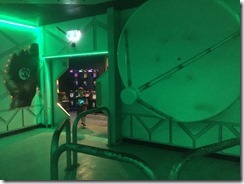 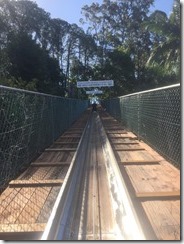 We hit the candy confectionary factory on the way out, and bought the odd bit of hard candy.  By now we’d hit about 2:30pm, and this was to be our last jaunt in Coffs Harbour this trip.

We returned to the resort, and had an informal birthday “cake” ceremony (the real party will be next weekend) and afterwards we eventually walked to the beach.

We must have spent about an hour or two on the sandy shore, I helped D build a giant sand fort to unsuccessfully keep the increasingly encroaching tide out.  Jake went completely into the surf and Toni collected sea shells. 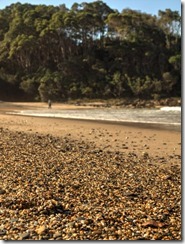 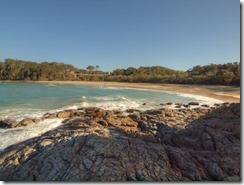 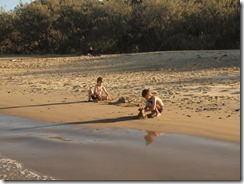 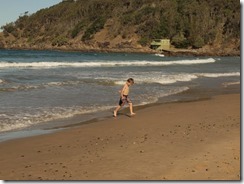 The sun shined and everything that could be well with the world briefly was in ours.

Upon return to the resort – yes – we were due back for a final go at the resort pool.  This time, about an hour of swimming before the sun started to become fleeting, and we cajoled the two fish up to the room for shower/change.  I looked up trip advisor to get an idea what our viable dinner options (Damian’s birthday) were, and we settled on a German restaurant occupying a huge windmill in North Boambee.  The other options were Japanese (further south) or Pizza and Pasta (North at Emerald beach).  I think we made the right call. 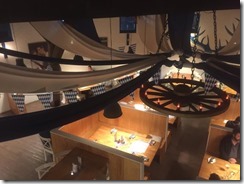 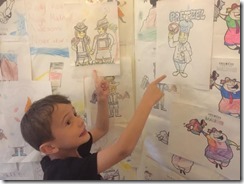 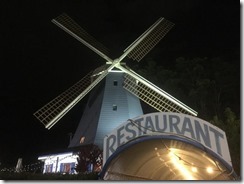 An easy drive, accommodating staff and a fine meal.  We even explored the second level of the working (but decommissioned by law) windmill which is impossible to miss when driving into town.  Damian retained his two coloured pictures from the meal and Jake donated his to the artist’s wall at the venue.  Stuffed to the brim, we returned to the resort for final packing and negotiations about bedtime.  Tomorrow is the worst of it – driving from Coffs Harbour to Sydney CBD in one day.  With two kids.  No iPads.