After a mammoth effort the previous day, I was feeling very sore.  I really struggled and needed a long shower to try and retore some health.  It was close to 8:30am when hunger got the better of me and I decided to return to the diner from the previous day.  Unfortunately they were full, so I decided to try a waffle place up near Millennium Park, but that place had about 50 people sitting outside waiting – so I decided to try Eggy’ again.  They had a 25 minute wait, so defeated, I went back to the Hyatt and opted for breakfast in the atrium. 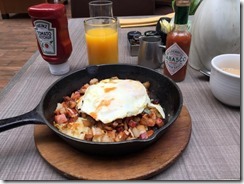 I went against the buffet, and ordered a meat lovers skillet which proved to be an unwise choice.  I returned to the room and lay on the bed for a bit, followed by some bathroom theatrics.  I’d really over done it.  I decided to spend the next hour just resting, and did so with no further issues.  I needed to be nomadic, because by midday I’d be without an abode.  I decided to check out at 11:30am and beat the checkout rush. 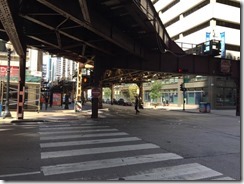 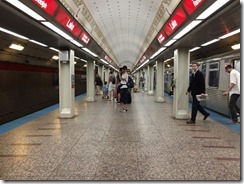 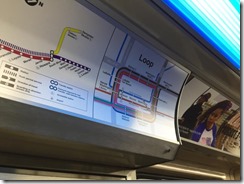 Checkout was smooth, and I was able to leave my two bags at the bag drop, freeing me up for further exploration.  At this point I had some options – stay in downtown some more or figure out the transit system.  I went for the latter, since I figured I’d seen enough of the Loop the previous day.  I walked down to Lake St and found the Red line (not to be confused with Lake/State, above ground).  I bought a day pass and boarded the next noth bound red line train. 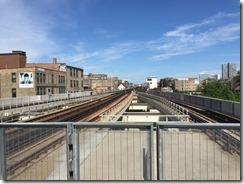 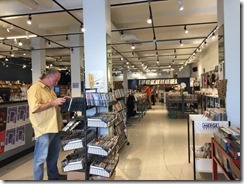 I left the train at the Belmont stop.  It was fascinating riding the above ground train (“L” for Elevated) and watching the suburbs of Chicago whistle on by.  There’s a lot more low rise buildings as you get further out of downtown, many of which have external fire escapes, sometimes made of wood.  For the most part these looked like condominiums or townhouses, with businesses and churches thrown in for good measure.  There was plenty of foliage around as well, to keep the region green.

At Belmont, I crossed over and into the local Reckless Records store which was far bigger than the downtown equivalent.  I wish I’d spent more time (and money) at this location!  I spent at least an hour or so sifting through the thousands of quality used records before settling on three LPs.  One is a very rare Jazz album from 1958 which I’d especially made the trip for.

Once finished, I had a decision to make.  Did I dare to miss the opportunity to see the Chicago Cubs play at home at the fabled Wrigley Field?  As it turns out, no – I did not!

For US $50 I scored a reasonable seat using StubHub, and armed with my QR code ticket, I took the wrong L line north – to the exact same named stop that I needed to travel to.

So I ended up about a kilometre away from Wrigley Field by virtue of taking the Brown line instead f the Red line north from Belmont.  More walking. 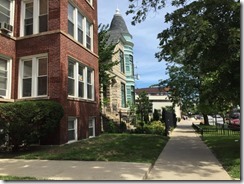 The neighbourhood on the approach is very nice, mostly townhouse style residences which neat lawns and clean and tidy sidewalks.  A lot of Cubs signage, which was hardly out of place.  It did mask the stadium until I was right upon it.  It really is just nestled in amongst the suburb.  Getting into the stadium required a bit of finesse, the lines snaked out to the road, and marshals were telling off anyone who dared to queue on the road. 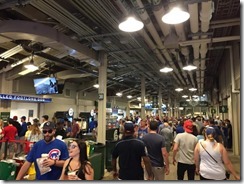 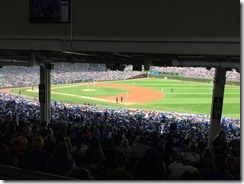 I snuck onto the tail end of a queue and passed through security and into the stadium.  I’d narrowly missed the first pitch owing to going to the wrong station, but the first innings had only just started.  The stadium is the second oldest in the major league (next to Fenway in Boston) and opened way back in 1914.  Fenway beat Wrigley by two years (est. 1912).

As a result, it’s a venue that focuses on getting fans into the game – there’s few corporate boxes, the seats are maximised for the fans, and it accommodates over 41,000 fans.  It’s an amazing venue.  I used the men’s room on the way in as I did not anticipate needing to leave my seat.  I was dead tired. 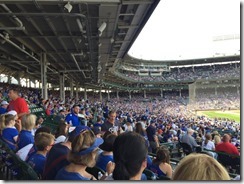 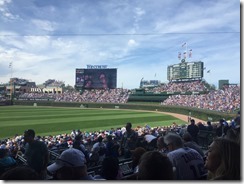 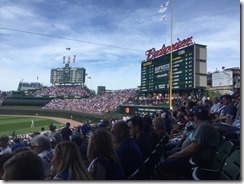 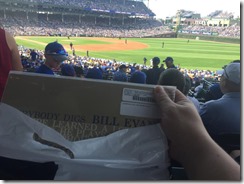 It was a very close game.  Washington had taken the first two games of the series (the following two days), so the Cubs were out to prevent a three game sweep.  The fans turned out in their thousands to cheer on the team.  I didn’t leave my seat once I sat down, I took in the atmosphere and engrossed myself in the game at hand.  There was an amazing diving catch made by the Cubs left fielder that was replayed to much applause on the big screen.

The rustic manual scoreboard is a nice touch, complimented by the higher tech boards nearby.  There’s even seats positioned on buildings near the stadium (Wrigley Rooftop) since the stadium is surrounded by suburbia.  Neat!

It wasn’t until the 7th inning that I left me seat – to leave.  Sadly, I couldn’t risk missing my next flight, so I was forced to be somewhat conservative and hedge my bets on transit time.  I left as the game continued, the score tied. 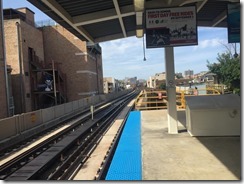 So I found the correct L station nearby, and began the trip back to the Lake station. 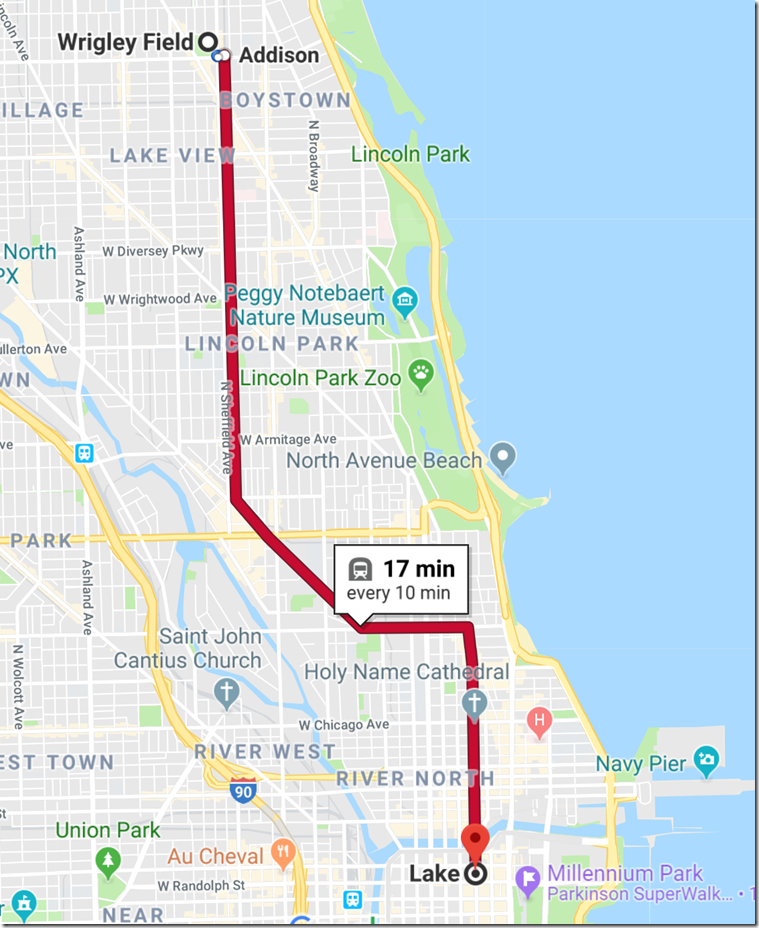 It was an uneventful trip, and I walked the now familiar route back up to the hotel.  I collected my bags and made my way to reception to jump a cab to O’Hare airport.  It was an event-free trip to the airport, and I checked my bag and headed to the (tiny) American Airlines lounge.  I suspect I was in the smaller of the two locations, I found the first class lounge the next day.

To my surprise, the Cubs game was still going! 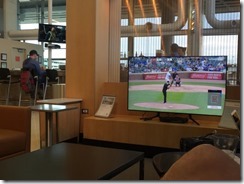 They had just entered the 11th innings, and Washington had scored 2 runs in what would seal the game.  I sat back, charged my phone and grabbed food and drink and watched from afar.  I would not miss my flight this time.

I caught my planned flight to Fort Wayne, Indiana.  The gate attendant tagged my carry on as “premium” hand luggage and I was forced to part with it on the jetway.  When we reached Fort Wayne, I waited for it to be delivered to the gate, but it did not appear.  I followed everyone else to baggage claim, and out popped my checked luggage.  Worried, I traced my way through the empty terminal until I found someone.  It took a while, but they eventually routed my green carry on bag to me.

I exited the terminal to find a single taxi, and he already had a fare.  Luckily he took us both – it didn’t look like there’d be too many other options, either!  The other passenger was a dance choreographer from L.A. who worked on the Emmys and many other events.  He was dropped off first, and then I was taken to the Park Hyatt.

With zero dinner options, I opted for wings from the hotel bar and they were great.  I chatted with the staff and some of the other guests before calling it a night. 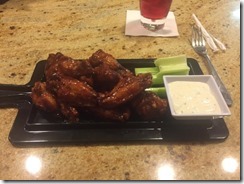 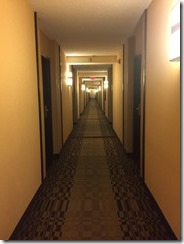 I talked to Australia – Damian was sick.  He’d been up all night throwing up.  I wished I could do more, but here I am stuck on the other side of the world.  I read the remained of my book and had a bath to relax, and finally.. finally went off to sleep – bags packed and work clothes at the ready for the next day.