After the calamity of the previous night’s missed flight, and the very late arrival into the Hyatt, it was refreshing to wake up reasonably early and ready to face the day.  I had very little agenda, so I decided to keep it pretty simple.  At first. 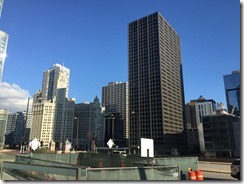 First – I chose to stay in downtown Chicago.  The area is referred to as “the Loop”, and I didn’t quite know why until I attempted to use public transport.  The Loop is an above ground train system that does a loop of downtown.

I don’t much like eating at hotels as the guests can sometimes be considered a captive audience, so I usually try to find something local that’s rated well.  I located a diner not far away which was rated below 100 out of thousands (on TripAdvisor) and navigated to where I thought it was. 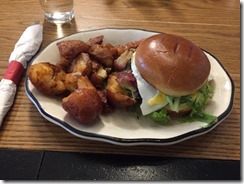 The north-east area of the Loop is a bit weird, it’s actually elevated at least 3-4 storeys above the actual ground level.  The diner was down at ground level, and so it took a while to figure out how to get down there.  It was worth the effort, and proved to be a great find with excellent and reasonably priced food.  They even had an espresso machine for some proper coffee.  I sat at the counter, but I could have had a table for one. 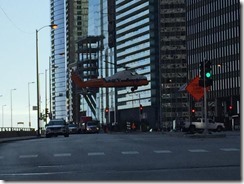 After breakfast, I went north back up towards the river.  On the way back to the hotel, I wandered into a TV crew who were setting up to film a helicopter landing on the street.  I lingered long enough to watch the spectacle.

There’s a river that makes its way though the city proper, and it also neatly carves off downtown.  As a consequence, the city has constructed many iron bridges to connect downtown to the rest of Chicago.  Some of these are quite famous, and they are mostly best viewed from the water’s edge.  Luckily, the city build a riverwalk which is accessible from the north side of the Loop.

As I rounded the river I noticed two very distinctive buildings that reminded me of a record cover.  Sure enough, the cover of Wilco’s “Yankee Hotel Foxtrot” is adorned with these two unique buildings, called Marina City. 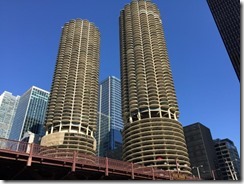 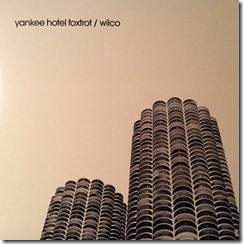 I continued along, walking the length of the path, which ended on the north west side.  I’d seen some highlights of the Chicago skyline on the midnight taxi ride into the hotel, but now I had a much better view of the amazing and innovative skyscrapers that frame downtown Chicago. 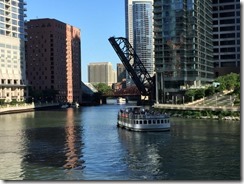 Surfacing on Lake street, where the riverwalk ends, I stalked south along Wacker St killing time as the record store didn’t open until 10am.  It was 9:45am when I located the Willis Tower (formerly Sears Tower).  This is the tallest building in Chicago, and is hard to appreciate up close and personal.  It is the 21st tallest building in the world and second tallest in the USA. 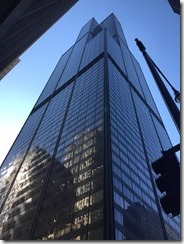 Although the lobby is being refurbished, the skydeck was still open.  It’s not inexpensive to visit, but the views make the trip worth it.  On a busy day, youd snake around many twists and turns (much alike New York’s Empire State building), but on this day there was close to zero crowd. 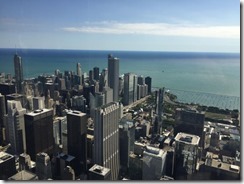 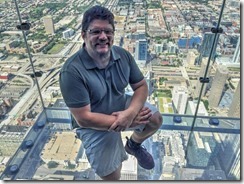 The main attraction is “The Ledge” which juts out over the edge of the 103st floor.  There’s nothing between you and a sheer drop besides some seriously thick glass.  After I circled the floor and picked up a souvenir for Toni (a mosaic of the tower), I joined the brief line for the ledge.  I watched two girls doing handstands and flips inside the ledge!

After taking in the views, I made my way back down to the ground.  I made my way up to Reckless Records to spy some new LP acquisitions. 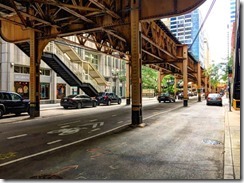 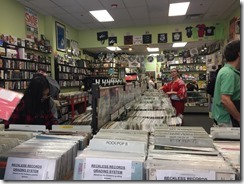 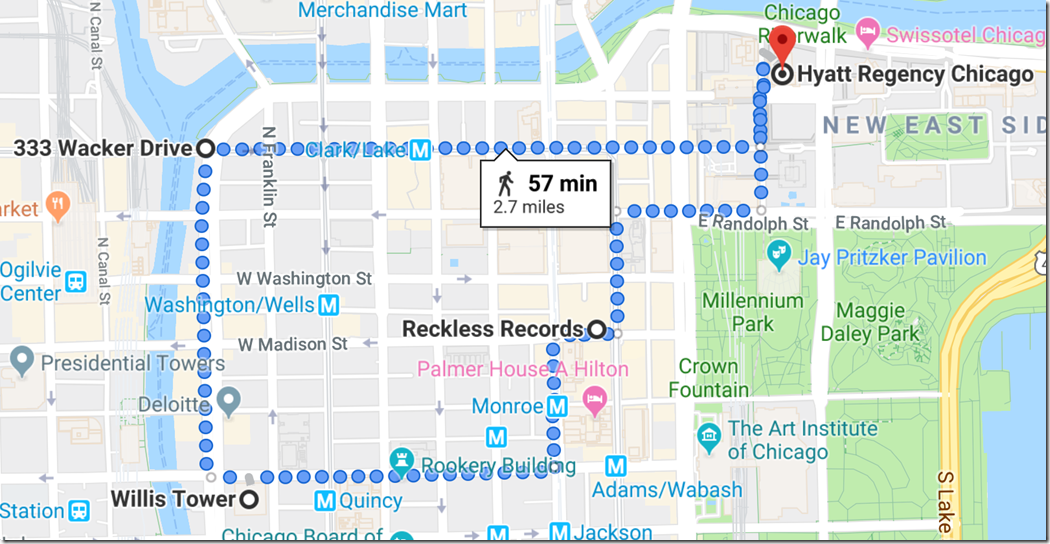 After picking up some new vinyl, I returned to the hotel.  I stashed the score and then decided to walk to Millennium Park.  There was a free music concert on, so I had to walk to the entrance (the park was fenced off) and once inside, made a move towards “the bean” which is actually called “Cloud Gate”.  It’s a very tall bean shaped silver sculpture, and very popular.  It was thronged by people both around and underneath. 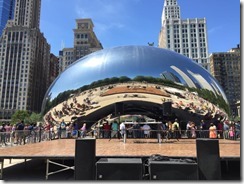 After taking a few selfies and taking in the city skyline, from here I had a look at a nearby concert/stage, and then I started walking south to Buckingham Fountain.

This is the fountain at the start of the credits for 80s sitcom “Married with Children”, and it is very large and impressive.  It wasn’t as impressive a crowd around the fountain and as I started to walk even further south the numbers thinned even further.

My next stop was the Field Museum, which was a recommendation from a former Chicago native who I’d sat next to on the inbound flight from Dallas the night before. 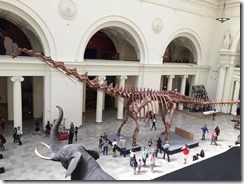 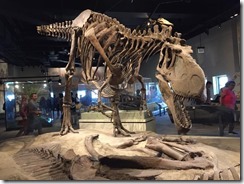 The big drawcard is the huge collection of dinosaur bones, including a ferocious T-Rex called SUE (named for Sue Hendrickson, who discovered the dinosaur in 1990 during a commercial excavation trip north of Faith, South Dakota).  The building is massive and covers two above ground floors and one below ground level.  It’s a tad pricey once the exchange rate is taken into account, but it’s very similar to the natural history museum in New York, so worth it.

I spent about three hours or so inside the museum, I took in one of the special exhibits (where you discover what it is like underneath the soil) and also went through a lot of the natural history exhibits – specifically Egypt and Africa.  There was a room dedicated to Chinese jade, and another to gemstones.  There was also a very interesting collection of meteorites.

At one point I found a temporary exhibition in an out of the way part of the upper level, and sank into a leather backed chair and almost slept for a bit.  Very few people came in as it was somewhat nondescript.

I bought Toni a polished amethyst stalagmite from the museum store on the way out.  Perfect luggage item – a heavy rock!

Opposite the museum, to the south, is the legendary Soldier Field stadium – home to the Chicago Bears (NFL) football team, the number #1 rival to my adopted Green Bay Packers.  They are kicking off the NFL season this Friday in Chicago.  I could not see much of the stadium, it was closed & fenced off.

I then walked back into the city, but this time by way of west of the Millennium Park (tracking east of the buildings), before diverting across to Target, not far from Reckless Records.  The notable thing about Target, is that it had a dedicated elevator for shopping carts, which would allow the cart to follow you up or down from the two levels of the store.  I don’t think I’ve ever seen that before. 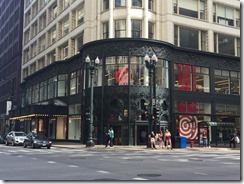 I bought some toys for the boys and some Ghiradelli chocolate for Toni, plus a card game (Exploding Kittens).  I bought Jake a pair of fighting robots in the HexBug brand, and some Minecraft figures and a “diamond sword” for Damian. 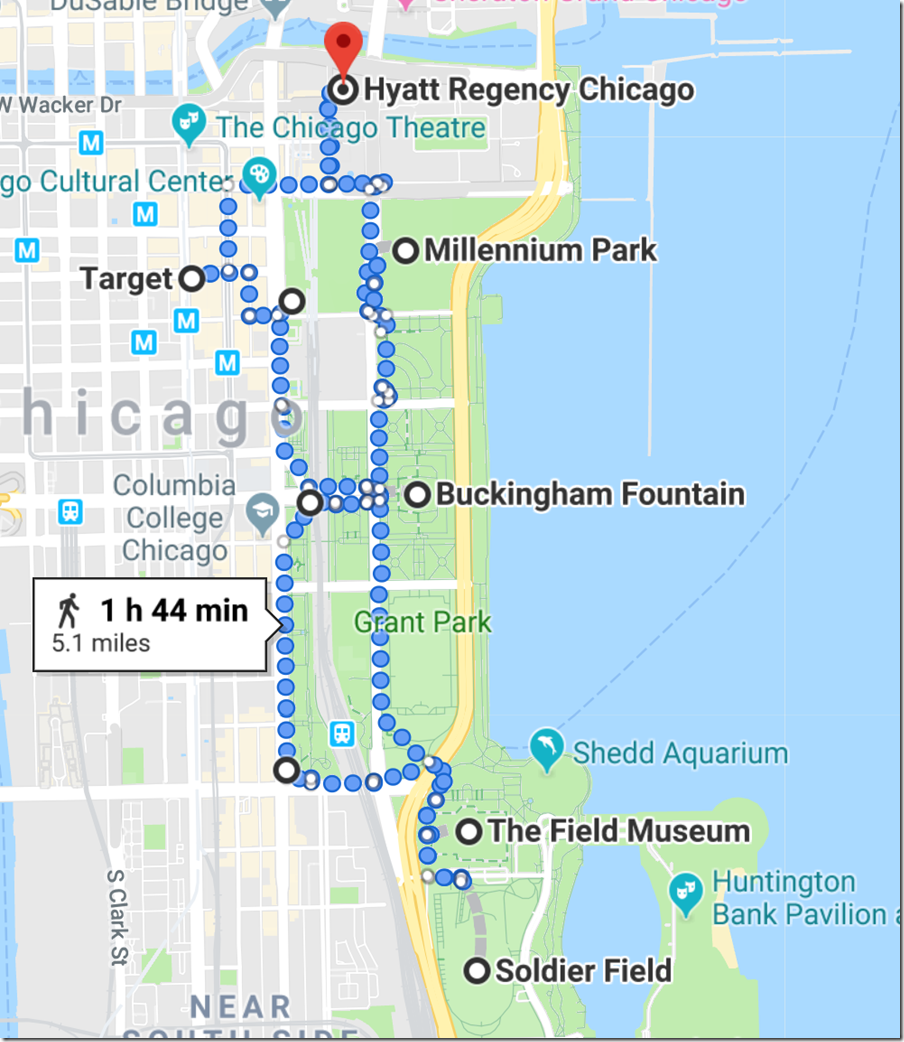 Needless to say, I had to take it all back to the hotel rather than try an extended journey around downtown. 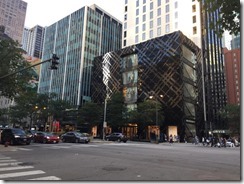 After talking to Australia and showering and freshening up, it was time for dinner.  I’d had Giordano’s recommended for Chicago deep dish pizza, and there was one within two blocks of the hotel.  I walked down (Lake St) but it was super busy – packed.  I didn’t want to wait and I realised there was another Giordano’s up north within the Magnificent Mile.

So I headed north and crossed the river.  This is a serious shipping precinct, and the road was decorated with the big name brands towering over the footpath.  It was a good route, and before long I was there.  Similar problem – it is very popular – but this time I went to the bar.  I met a guy from Baltimore (Dan) and we chatted and had a few beers while the pizza baked. 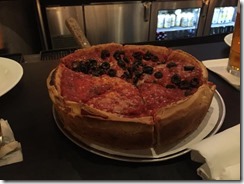 The deep dish looks more like a pie; with ingredients baked into and on top of the pizza.  It’s not deep pan (thick crust), but really two layers of topping.  Very filling, I was only able to eat a bit over two slices.  Afterwards, I started the journey back to the hotel.  There were heaps of people out and about, and the city was genuinely pleasant and light filled.

By the time I returned, I spent some more time talking to Australia.. It was about 9:30pm and I was about ready to simply hit the sack.  I looked at my Health stats from the iPhone, and realised I was a few hundred steps shy of 30,000 steps.  I couldn’t help it – and it was my only full day in Chicago – so out of sheer madness, I left the hotel and ventured out to check out Millennium Park by night. 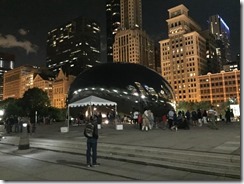 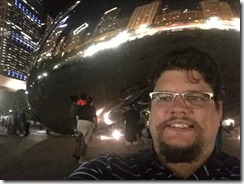 It was busy by day, but quieter by night.  I was able to walk under the bean and take in the great Chicago skyline as a backdrop.  The two large rectangular water features nearby were providing some welcome H2O on the reasonably hot night.  A few people were playing in the water, including one audacious kid who ran through the spray. 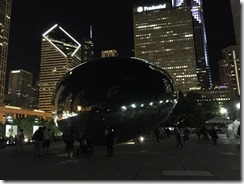 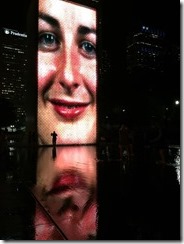 Returning to the hotel, I’d blown to having travelled 25.4 kms in 32,315 steps and climbing 18 floors for the day.  I packed my bags and organised my things ready for checkout in the morning.