Our fourth day and it is time to move on.  Today we thread the island state and head towards the capital, Hobart. 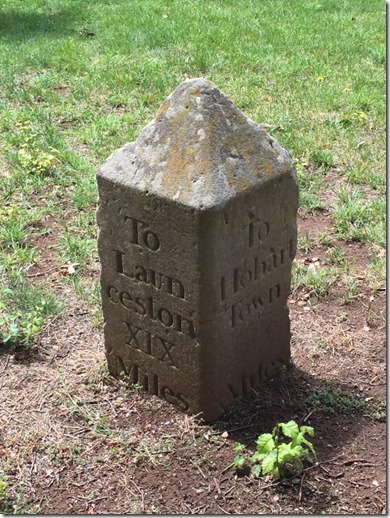 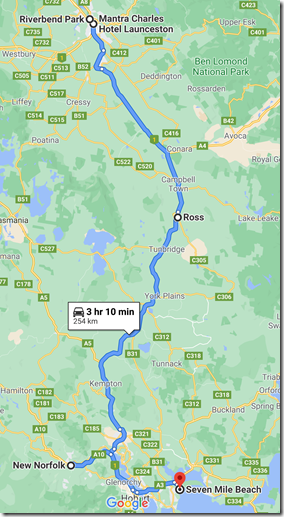 We awoke early and began the process of packing up.  I’d gotten into the habit of procuring coffee from a nearby café, but today we decided to go into town.  The weather looked promising as we peered out towards East Launceston.  We walked into town (10-15mins on foot) and eventually found the place I was looking for – but alas, only coffee (it used to be called “Shots on Wax” and had sold vinyl).  We took our time and enjoyed watching people passing by. 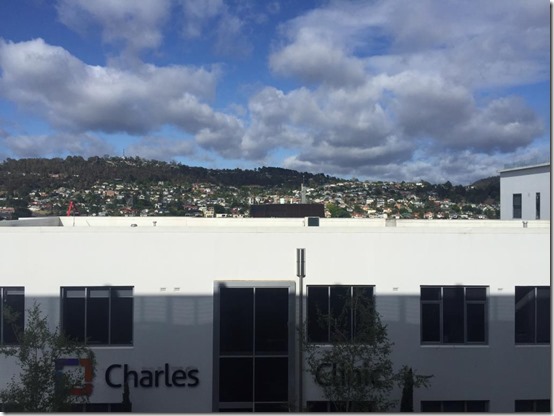 Before long, we checked out of the Mantra Charles and took to the car.  We decided to give the kids another opportunity at Riverbend Park (given a lot of the day would be driving south), so we headed north and let them have at it. 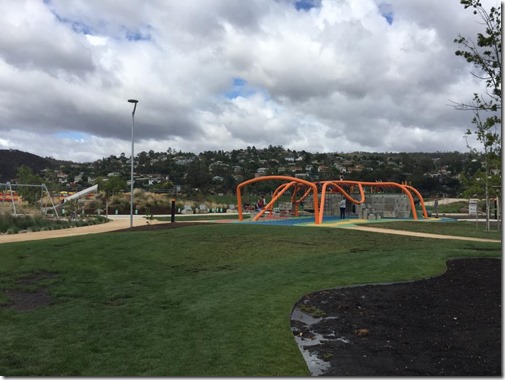 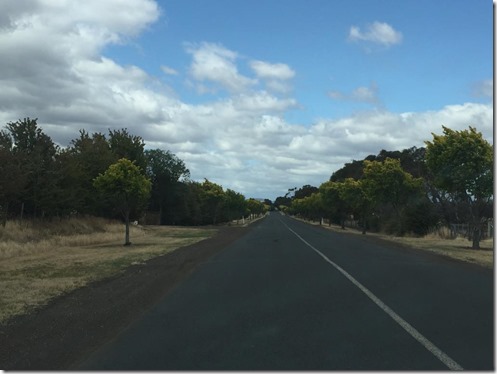 The road was peaceful and the journey uneventful.  We wove through places like Perth, reaching deeper into the heart of the island.  The terrain was mostly farm land with forests and hills in abundance.  I’d already decided we would be stopping at a charming little village called Ross which was helpfully “sort of” half way to Hobart.  We pulled off the highway and made our way into town. 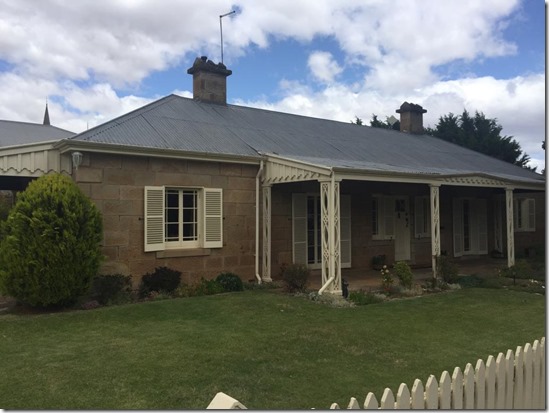 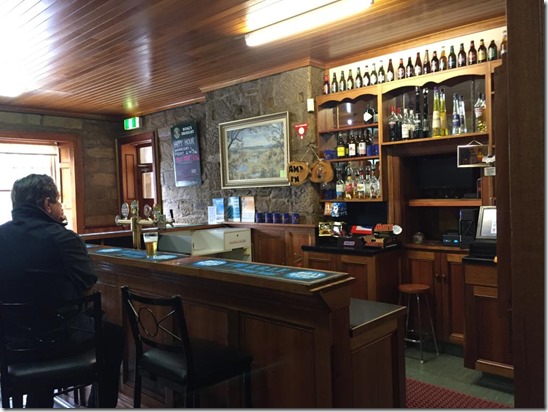 There was quite a bit to see, mostly federation style heritage buildings, a very old church, and a main street packed with character.  We opted for lunch at the pub, and the place was exactly the sort of experience you’d expect – like an English village pub and the food was very good.  Keeping the kids from being loud was less easy.  We spent a reasonable amount of time walking the village and looking inside some of the sparse shops.  As we were beginning to head out of town we came to THE attraction – the Ross bridge. 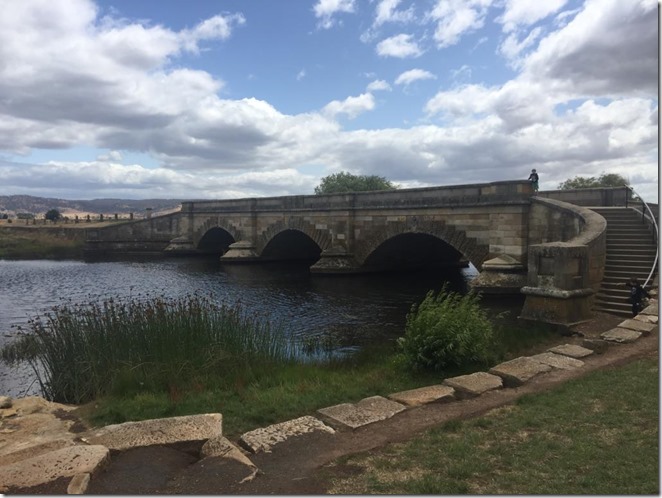 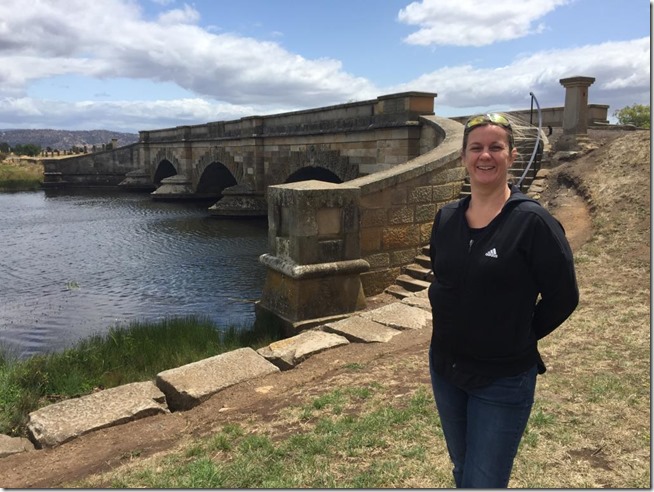 My heart filled with joy as vividly recall visiting this bridge with my family back in 1990, and it is virtually unchanged since then.

Now.. standing with my own family on the same soil, taking in the same bridge.  Amazing.

It really is an impressive and well built example of early colonial construction (1836) and well worth the visit  The bridge at Richmond is also impressive.

We lumbered back into the car and continued our journey south.

As we began the approach to Hobart, we detoured slightly to an Antiques Centre in an outlying town called New Norfolk.  Here I made a massive blunder and bought an album for about 5x its actual value by wrongly mistaking it for an original pressing.  Not my finest hour.

We now drove direct to the Wyndham resort at Seven Mile Beach and began the process of getting acclimated to the new region.

The Wyndham (Ramada) at Seven Mile Beach is a series of detached houses, with some townhouses peppered into the mix.  The resort surrounds a central complex which contains the pool, gym and spa plus the main reception and meeting rooms. 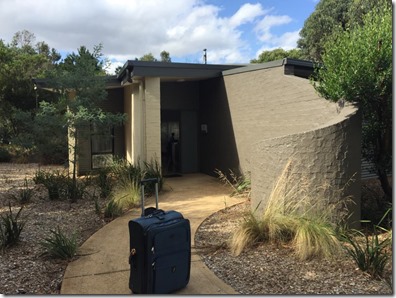 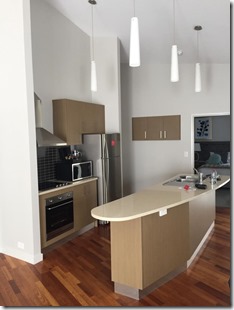 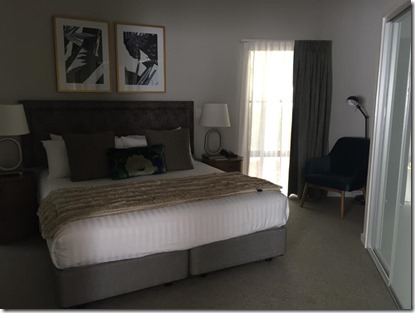 We moved our things into our assigned bungalow and then made for the pool.

Later, we decided to dine on-site at the Beaches restaurant.  I had the seafood trilogy and crumbed lamb cutlets – very nice.

After dinner, we walked down to the beach to see what it was like.  The boys being the boys, lopped straight into the very cold waters. 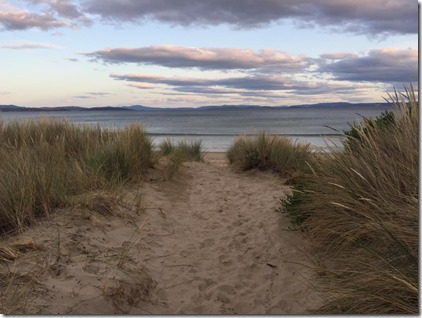 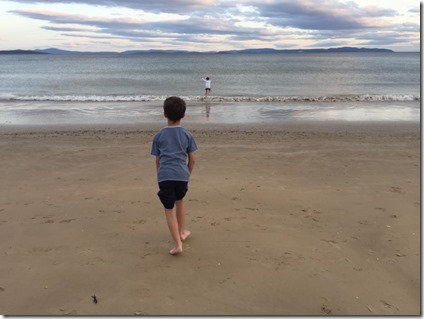 Afterwards, we walked the return route back to the bungalow and retired for the night.

Today was our first day of the Easter holidays after driving down the coast yesterday.  Although technically the holiday started on Monday, I’d just returned from Dallas, Texas on Sunday and needed the Monday to try to adjust for jet lag.  Tuesday was the first day I started feeling normal enough for the 2.2 hour drive south.  Once we arrived, I did the yard work and went shopping for supplies before we all turned in for an early night at only 7:30pm.

Today we got up at around 7am and had an early breakfast.  We mainly stayed at the house for a few hours before I whipped the boys into the car for our first trip out.  We went to the park nearby and spent some time there before driving back so I could snap the model number of our A/C (Toni, back in Canberra, is attempting to get it serviced when possible).  Afterwards, we went into town and the boys played on the park flying fox for a while while I had a look at the river.  It’s a nice 25 degrees and sunny, and very pleasant.

We later drove to Vulcan street and parked nearby to see if the erstwhile Moruya ice cream parlour was open, but alas it is not (and unclear when it will reopen).  So we drove north to Mogo, and had ice cream there as I had a look in some of the unusual stores for records (found some, but over priced and meh).  We then drove up to Bateman’s Bay to Target, only to find it is closing down and had little stock.  We got back in the car and drove to the plaza.  We dropped into Kmart and I bought the boys some Lego for the afternoon.  We also had a look in EB Games on the way out.  I was disappointed to see the second hand bookstore has gone out of business.

We drove back to Moruya and had a late lunch and assembled most of the Lego.  It was around 4pm that I suggested beach, so we ended up at Broulee beach for about a half hour as the sun started to wane.  We left around 5pm and I got dinner on when we reached home.  The sun has set, and I’m angling to get the kids to bed around 7pm.  It’s worth a shot.. R 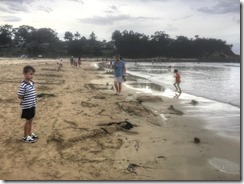 Well, new year’s eve is already upon us which means we’re close to bidding farewell to 2018 for good.

Not much to report this morning, still doing some odd jobs around the house.

After tidying up the shed and eating a lovely oysters Kilpatrick made by my darling wife, we threw caution to the wind (thunderstorm approaching) and scooped the kids into the car and drove north to Broulee.

Today was the Broulee sand sculpture competition, and we were obviously two hours late.

We incorrectly went to the surf beach initially, before realising our error and going to the main beach.

At any rate, many creations survived and are photographed here for your viewing pleasure: 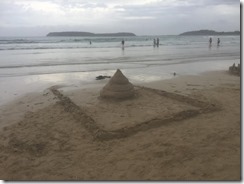 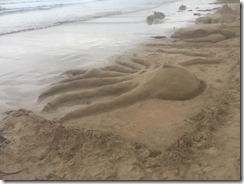 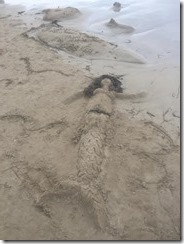 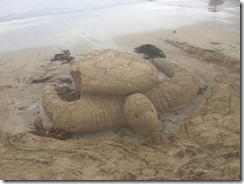 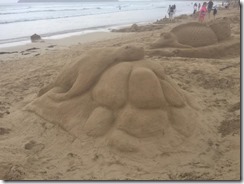 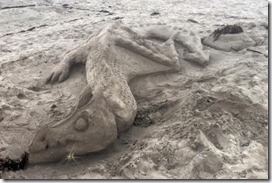 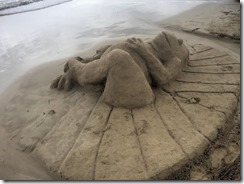 ..and that’s about when the rain came.  It teamed down, soaking all of us as we made a mad dash for the car, parked inconveniently at north Broulee on the north side of the bridge.

Afterwards, on the return, we stopped for some extra food to tide us over the NY public holiday.

Upon returning, I put the finishing touches to a new name for our house: 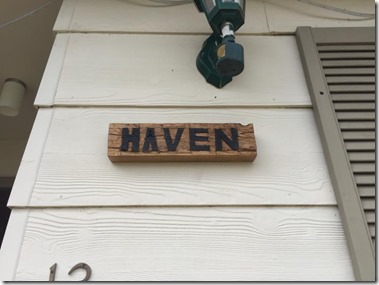 This is chiselled from some structural timber I found on the floor of one of the sheds.  The name came from darling wife, a reflection of the serenity and peacefulness of being down the coast.

Thus, it represents something that was here before we bought the place, and my contribution (chiselling & varnishing) represents our contribution to fixing up the property.